More from #DTTT Blog
How are consumer attitudes shaping Travel trends in 2021?
Share:

This week we caught up with YouGov to share some insights on the latest travel trends for 2021. With a new year ahead, we wanted to check how travel sentiment has been evolving across different markets and customer segments.

How is the pandemic affecting travel intentions compared to 2020? How is consumer sentiment shaping domestic and international travel? How are travel restrictions and vaccines affecting travellers' choices?

The latest research from YouGov shows positive signals of customers resilience and renewed intention to travel, identifying opportunities and possible drawbacks for the travel industry. Everyone agrees on the significant negative impact of coronavirus on the Travel & Tourism industry. Still, there are many debates about the path to recovery – when, how fast, how bumpy the recovery will be, what’s the best way to travel post-vaccination and how consumer preferences have changed – be it for leisure or business purposes.

Globally we see consistent travel demand. That has not changed significantly in the last quarter, suggesting that the pent-up demand remains uninhibited by the negative news of spikes in new infections in key tourism markets. Notably, the appetite for a domestic leisure holiday has remained the top choice across different countries. Around half of respondents plan to travel within their country in the next 12 months. Approximately 1 in 4 are planning a holiday abroad.

There is a grey area and lots of unknowns concerning business travel, which currently lags significantly behind from a consumer perspective. Bill Gates told CNBC in November that "over 50 per cent of business travel and over 30 per cent of days in the office would go away. The CEO of Star Alliance, the world's largest airline group, predicts there will be a "structural change in terms of the business travel segment" that could leave the sector up to 30 per cent smaller, though other business leaders disagree and are convinced a backlog of business travel will lead to a swift recovery. YouGov will continue to monitor and track how the consumer sentiment changes related to different types of travel as vaccines are rolled out and we start going back to normal life as we know it.

Last thing to note is that the numbers of those who do not plan to travel have been on a marginal but steady decline, a trend we especially note amongst the younger travellers – gen z, and millennials.

'Staycations' will lead the travel recovery, but international travel still on the books for many

Similar trends can be observed in the UK, although notably, the sentiment has bounced around a lot more. This is likely attributed to changes in tier systems and lockdowns. Overall in the UK, there's a greater appetite for travelling locally and a higher proportion of people eager to go abroad – currently, 1 in 3 are planning an international holiday.

Business travel sentiment remains subdued with mainly consumers in London and the South East keener on getting back to travelling for work, which drives the overall national number. The good news is that those travel restrictions in place not only have not curbed peoples’ desire to travel, but the number of consumers who say they won't book a trip this year has also declined.

Despite restrictions and lockdowns throughout 2020, more than two in five Brits said they were still interested in travel (43%). The topic of travel ranks third only slightly behind animals and nature, and food and beverage as the most popular interest among Britons.

While travel remained the third most popular interest in the UK, there were fewer Brits interested in travel in 2020 than in 2019 prior to the pandemic (43% vs. 46%). A closer look by age groups reveals that the largest declines in travel interest occurs among those aged 55 and over (49% in 2019 vs. 44% in 2020). By comparison, American interest in travel remained steady at pre-pandemic levels throughout 2020 and that could potentially be attributed to several factors – market remained largely open to domestic travel, most venues did not shut down and travel players have been very active through business promotional campaigns.

Globally health risks weigh heavily on peoples' minds, though interestingly in the UK and a few other markets worldwide, consumers see travel restrictions as the biggest obstacles for them taking a trip. This potentially signals a pent-up demand and as soon as travel corridors reopen and the lockdown ends, we should see an increase in travel sentiment and bookings. Brits also are less price-sensitive when it comes to travel obstacles, so a possible economic recession is unlikely to have a major impact on travel demand.

Although Britons are keen to travel themselves, they are very concerned about inbound travel. A recent YouGov study revealed that 87% are in favour of making arrivals quarantine in hotels for 10 days when they arrive in the UK. Government officials are currently in talks with hotels about the New Zealand-style policy and haven’t ruled out making travellers foot the bill which could be as steep as £1,500 per person.

The current policy of making all arrivals quarantine at an address of their choice for 10 days is slightly less popular but still has very high backing at 79%. 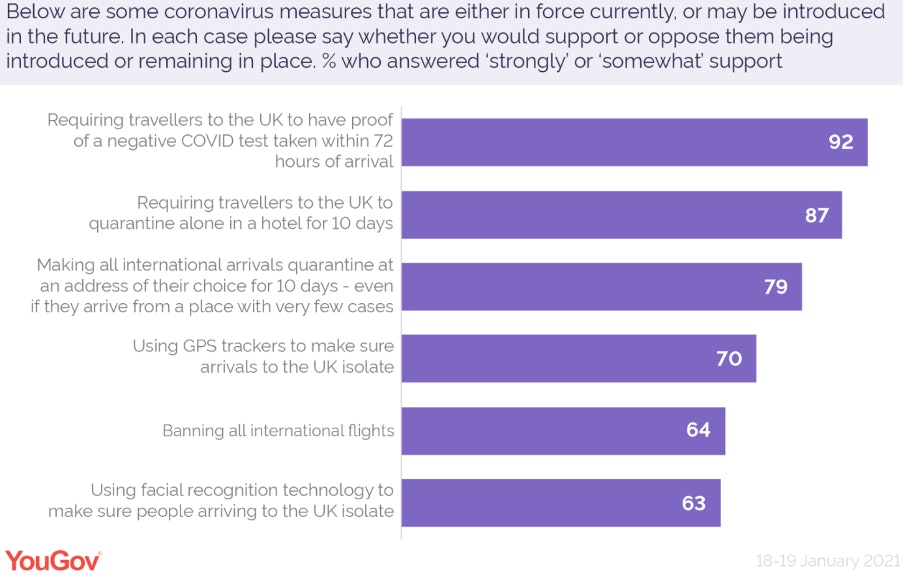 Globally we see a strong consumer preference to travel by own vehicle, followed by a low-cost carrier and train. This largely ties in with a domestic holiday trend or people's willingness to travel short or medium distances within their own country's proximity. However, although air travel may not be an immediate consideration for most, trending destinations, as soon as people are ready to travel and feel it is safe again, this is likely to be via air. 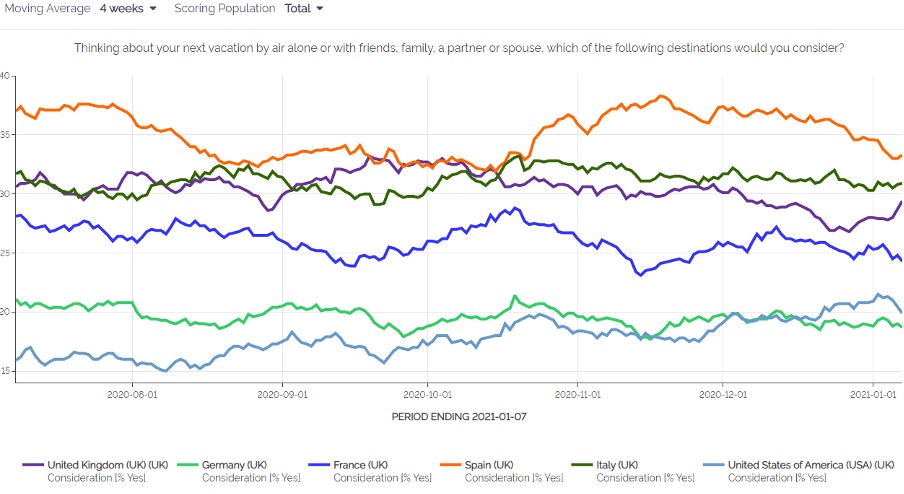 A recent YouGov custom study found that 92% of those surveyed in the US and the UK who have travelled by air since March had either a positive (61%) or neutral (31%) experience at the airport regarding health and safety. Their airport experiences make 40% of recent air travellers more likely to travel again before June 2021, as opposed to 15% saying their experience would make them less likely to travel. Among those who haven't flown since March, a COVID-19 vaccine was the top motivator to return to air travel (48%). The industry must work together, convincing consumers that air travel is safe. If consumers think that some airlines or airports are safer than others, it casts doubt in peoples’ minds about the overall safety and risks of being at the airport or flying. Hence collaboration is more important than ever and changing people’s perception will be key in driving the demand.

It’s been a challenging year for the travel industry, and a lot of marketing activity has been put on pause while it waits for travel demand to return. Vaccine approvals and distribution to the general public signal an end to the pause on travel and a return to active planning and travelling. Now is a critical time for reinvigorating connections with consumers and for preparing for the resurgence of travel.

In 2021, travel brands have one chance to be part of a consumers' amazing, magical first trip after more than a year of being grounded at home – the stakes for positive brand experiences that earn loyalty are likely to be higher than ever before.